Drive Defensively – The Life You Save Could Be Your Own! 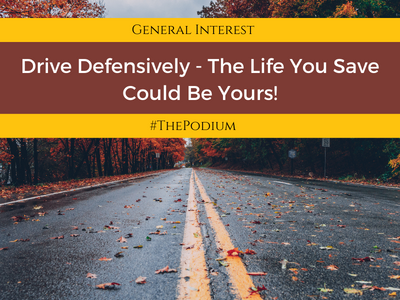 When I was in grammar school – probably in the Fourth Grade – I saw a demonstration that sticks in my mind to this day.  The California Highway Patrol paid the school a visit.  The officer drove the patrol car right onto the blacktop of the schoolyard.  After talking to us about safety while crossing the street, the officer proceeded to demonstrate how long it takes to stop a car at various speeds.  He first drove at about five miles per hour and then slammed on his brakes.  There was a short skid mark – but not too long.  He increased his speed to ten miles per hour; to fifteen; to twenty miles per hour.  As you can probably guess, the skid marks got longer and longer, and the squeal of the tires got louder and louder.  By the time the officer got his speed to about forty miles per hour, the skid marks covered the length of the blacktop and the squeal of the tires was deafening.  The lesson to us at the time, was to look both ways before crossing the street.  But this turned out to be my first lesson on the value of defensive driving – even though I wouldn’t realize it for many years.

Defensive driving is focusing on anticipating and reacting to potential hazards while driving.  It is also anticipating traffic conditions as you travel along the streets and highways and using skills to prevent accidents.  Developing defensive driving skills can save lives, and keep your insurance premiums a little bit lower.  I was fortunate to learn to drive from my father, who drove for UPS when he was young.  His tips and tricks have helped me, and I share them with you below.

Avoid Distractions While Driving – Driving a vehicle is a tremendous responsibility and deserves your full attention.  Although speaking “hands-free” on your cell phone is generally allowed, it is probably not wise to engage in a lengthy phone conversation while driving.  Conversations with your passengers can be equally distracting.  It goes without saying that any texts you receive while driving can wait.  Consider using an automatic reply/DND function on your cell phone to let texters know that you are driving and therefore unavailable.

The National Highway Traffic Safety Administration says that not looking at the road for five seconds while driving 55 miles per hour is like driving the length of a football field with your eyes closed.  Keep that in mind the next time you grab for a snack, or pull something out of your purse or backpack!

Be Aware of Road and Traffic Conditions – I was taught to scan the road conditions by looking at my left side mirror, my rearview mirror, straight through the windshield, and over to my right side mirror while driving.  Making this a habit will allow you to be aware of the vehicles around you, helping you to make safer lane changes and turns.  When making a lane change, you should be able to see the vehicle you will be getting in front of in your rearview mirror before merging into that lane.  If you drive certain highways on a regular basis, be aware of where the onramps are and anticipate merging traffic.  As you enter the freeway, be aware of the movement of the traffic in the lane you are going to enter.  If you drive during commute hours, be aware of when traffic typically starts slowing down to ten miles per hour.

Tailgating is not only annoying, but it is also dangerous.  Leave sufficient distance between you and the car in front of you.  I recently read the suggestion that a driver should pass a stationary object on the side of the road a minimum of three seconds after the vehicle ahead has passed it.  I checked my habit and found that I pass an object about five seconds after the vehicle in front of me has passed it.  Leaving space between you and the driver ahead will give you time to come to a safe stop or make a lane change if necessary.

Keep an eye on traffic conditions ahead of you.  If you see emergency vehicles ahead, slow down, and consider whether you need to make a lane change to stay out of the way.  If you happen to see an emergency vehicle coming up from behind, move to the right if you can safely do so, and stop if you are on a city street.  If you are on the highway, slow down.

Be a Courteous Driver – These days everyone seems to be in a hurry.  We pull up our Google maps or Waze app and try to beat the time indicated as the arrival time.  A few months ago, I was running late and exceeding the speed limit trying to make up for lost time.  I noticed that I would have only saved two minutes if I continued driving at that speed.  The risk I was taking by driving so fast wasn’t worth saving a mere two minutes.

We’ve all had difficulties trying to make a lane change – especially when you want to exit the freeway.  Be aware of drivers who are signaling their intent to merge into your lane.  On a similar note, be aware of the drivers attempting to merge onto the freeway and leave space between you and the car ahead to allow for merging traffic.

Avoid Bad Drivers– We’ve all seen drivers coming up behind us at an excessive speed and weaving in and out of traffic.  Move over, slow down and keep an eye on these drivers to keep yourself safe.  If you see one erratic driver, there may be another one in close pursuit.  And we all know that road rage makes some people do very dangerous things.

Obey the Basic Speed Law – The basic speed law says that one should never drive faster than is safe for the current conditions, regardless of the posted speed limit.  Fog, rain, heavy traffic, debris on the roadway and other hazards dictate the speed at which it is safe to drive.  On a related note, just because everyone else is exceeding the speed limit doesn’t mean you should.  Did you know that you can receive a speeding ticket just for keeping up with the traffic flow?

As we are all getting ready for a busy holiday season, we will be out and about more.  Being a defensive, confident, safe and courteous driver saves lives.