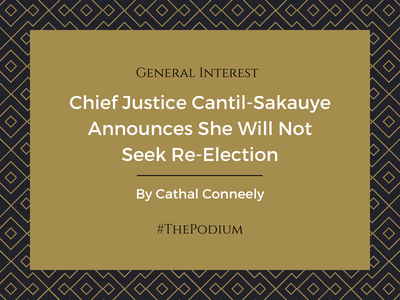 San Francisco—Chief Justice Tani G. Cantil-Sakauye today announced that she will not seek re-election as Chief Justice of California in the November 2022 general election. She will conclude her current term of office on January 1, 2023, after 32 years of service at every level of the state courts.

As the 28th Chief Justice of California, she is the first person of color and the second woman to serve as the state’s chief justice. During her 12-year term, Chief Justice Cantil-Sakauye envisioned an accessible court system on every level for all Californians that reflects the people and communities that courts serve. She has successfully advocated for reforms of court funding models, fees, and procedures that unfairly impact the poor; adequate, sustainable funding for court operations; diversity and inclusion in the legal profession; and the role of civic education and engagement in sustaining public trust and confidence in the judicial system.

In a statement issued today, Chief Justice Cantil-Sakauye said: “I have informed Governor Gavin Newsom that I will not seek re-election as Chief Justice of California and will conclude my judicial service when my current term of office ends. And of course, I will support the smooth transition of Judicial Branch leadership. Through his efforts, and those of recent governors, he will have a diverse pool of exceptionally well qualified jurists and legal professionals to choose from, and I believe the judiciary, the courts, and access to justice in California will be in good hands.

My first interaction with our justice system was when my family faced eviction from our home and my mother felt helpless. As the daughter of farmworkers, I experienced in my community what it was like to stand up for your rights and demand protections. As a wife I felt the impact of unjust Japanese Internment on my in-laws. As a judge I saw the devastating effects of family violence and established the first court in Sacramento dedicated solely to domestic violence issues. As Chief Justice I continue to keep in mind the faces behind the cases and remain focused on the goal of providing all Californians with equal, fair, and accessible justice.

A graduate of a public school, community college, and public university, I am proud to have served the people of California to the best of my ability at every level of our state court system.

The support and encouragement of my family, my extended Filipino family, minority bar associations, and numerous role models and mentors throughout my public service career have enabled me to achieve and succeed even under sometimes difficult circumstances. I am grateful to them all.

My career as chief justice is bookended by the Great Recession and administrative challenges at the beginning and now an historic judicial branch budget and the persisting difficulties of a Global Pandemic. Throughout my tenure, I have been privileged to serve in government with so many dedicated public servants and advocates: three governors; successive Senate Pro Tems, Assembly Speakers, and legislative members; justice partners and stakeholders involved with every part of our court system; as well as the judicial officers, court professionals, and the staff who serve on the Judicial Council of California and its advisory bodies. Their collegiality and professionalism have enabled us to move mountains—making sound statewide policy decisions and implementing an array of court programs and initiatives to benefit the public.

For me, collegiality with my bench colleagues was also critical to my service as a justice on the court of appeal and as Chief Justice on the Supreme Court of California, along once again with a wonderful and brilliant professional staff. We discussed, debated, and sometimes disagreed, but we were always focused on the rule of law and what was right and just.

I have taken, and administered, many oaths during my public service career, but no matter how many times I hear an oath “…that I will support and defend the Constitution of the United States and the Constitution of the State of California against all enemies, foreign and domestic,” it always resonates. Each generation must renew and refresh our constitutional democracy. I truly appreciate the opportunities previous governors, judicial branch leadership, and the People of California have given me to support, defend, and enhance the rule of law.

I have said before that I hold my office in trust until it is time for the next leaders to protect and expand access to justice—that time is now.”