Where Did Our Bankruptcy Laws Come From? 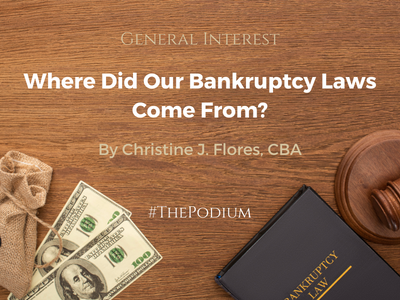 The word “bankruptcy” stems from an Italian word that translates to “broken bench”.  It referred to the custom in Florence, Italy, that when a merchant could not pay his debts, his bench or counter was broken.  Laws regarding insolvency go back to the Draconian code, which was in force centuries before the Christian era.  Bankruptcy eventually became a more humane system, where a debtor who surrendered all of his goods to his creditors was relieved of the harsh penalties of the older systems.  In the course of time, a debtor who could not repay his debts was discharged of those obligations.

The first English law on bankruptcy was enacted in 1542 during the reign of Henry VIII.  It was essentially a penal statute.  Debtors who fled the kingdom were considered criminals and their property was ceased and distributed among the creditors without relieving them of their obligations.  These actions were taken against all who took flight without making any attempt to pay their debts.

The first bankruptcy law in the United States was enacted in 1800, eleven years after the ratification of the  U.S. Constitution.  It was passed in response to the financial crises in 1792 and 1797, but was repealed only three years later.  It was very similar to English bankruptcy law and was very pro-creditor.  Only involuntary bankruptcy cases were allowed, i.e. merchants were forced into bankruptcy, and only merchants could be debtors.  Two-thirds of the creditors by number and value of their claims had to consent to the discharge of any debtor.

The next bankruptcy law in the United States was enacted in 1841, but was repealed in early 1843.  Under this Act, debtors could initiate their own bankruptcy cases, and any individual was eligible to be a debtor in bankruptcy.  Jurisdiction over these cases was vested in the U.S. District Court.  There were no state law exemptions with respect to property, and creditors could prevent a debtor from receiving a discharge of his or her debts by a majority of creditors in number and value of claims.  A debtor making a preferential transfer of property could be denied the discharge.

The Bankruptcy Act of 1867 was next passed, which followed a financial crisis in 1857.  This Act provided for both voluntary and involuntary bankruptcy cases.  Individuals and corporations were eligible to be debtors in bankruptcy.  Jurisdiction of these cases continued to be vested in the U.S. District Court.  The District Court appointed “registers in bankruptcy” to assist in the administration of these cases.  The “register” was the predecessor to the bankruptcy referee, which in turn was the predecessor to the bankruptcy court judges we have today.  An “assignee” supervised the liquidation of assets for the benefit of creditors, as the bankruptcy trustee does today.  This Act introduced the concept of the composition agreement into American bankruptcy law.  The composition agreement, predecessor to the Plan of Reorganization under current bankruptcy law, required creditor consent by a majority in number and three-fourths in value of claims.  This was the first time a debtor could claim state law exemptions.  The Bankruptcy Act of 1867 was repealed in 1878.

The act of Congress “To establish a uniform system of bankruptcy throughout the United States,” approved on July 1, 1898, was a radical departure from previous statutes in effect in the United States or Great Britain.  This act is known as The National Bankruptcy Act of 1898.  It was an attempt to make the administration of the bankruptcy estate more efficient, and the distribution of the debtor’s property to creditors more equitable.  Under the 1898 Act, the district courts sat as courts of bankruptcy.  Referees in bankruptcy were appointed by the district courts.  Referees were compensated on a fee basis until 1946 when they were given a salary.  Creditors then had the power to elect trustees and creditor committees.  Confirmation of a composition agreement in lieu of liquidation required creditor consent by a majority in number and in value of claims, and approval of the court that the agreement was in the best interest of creditors.

In 1938 during the Great Depression, the Chandler Act was passed, substantially revising the Act of 1898.  Under the Chandler Act amendments, Chapters X and XI governed corporate plans of arrangement.  Chapter XII governed real property plans of arrangement and Chapter XIII provided for individual wage earner plans.  Chapters X and XII were the precursors to modern-day Chapter 11 cases and Chapter XIII is the precursor to our current Chapter 13 process.

As you can see, our current bankruptcy laws have come a long way to give debtors protection from adverse action by their creditors, thereby giving an opportunity for a fresh start.  Our look at the evolution of bankruptcy will continue in the Podium next month.  But for now, I will leave you with a few interesting bankruptcy cases filed by entertainers and celebrities who I’m sure you will recognize by name.

Toni Braxton, a five-time Grammy Award winner, sold more than 15 million albums before filing bankruptcy in 1998. When she filed, Braxton was $3.9 million in debt and all of her household possessions, including the two Grammys she received in 1997, were priced to sell to pay off her creditors. Afterward, in 1999, she signed a new record contract worth $25 million and had hugely successful albums.

David Crosby, a guitarist, singer and songwriter, was a member of several bands, including the Byrds and Crosby, Stills, Nash and Young. He filed for bankruptcy in 1985 as his solo career was failing. Crosby is still recording and singing.

Zsa Zsa Gabor, an actress, filed bankruptcy in 1994 after a judgment was entered against her for libel for insulting Elke Sommer for more than $1 million.  Apparently, Ms. Gabor and her husband made statements to the effect that Ms. Sommer was broke and that she looked like she was 100 years old at the age of 53.  There were reportedly other judgments and Ms. Gabor overextended herself by taking in many horses and other animals at her ranch during nearby fires, sheltering and feeding them at her own expense.

Marvin Gaye, a musician, filed for bankruptcy in 1976 as a result of an expensive divorce and significant tax problems. Bankruptcy did not stop him from being successful. In the 1980s, he released some of the most well-known songs of his career, including the Grammy-winning “Sexual Healing.” Gaye died in 1984 at the age of 45. In 1987, he was inducted into the Rock and Roll Hall of Fame.

Larry King, a talk show host, filed for bankruptcy in 1978. That same year, King started on a late-night talk radio show which became a hugely successful CNN television show, which ran for 25 years.