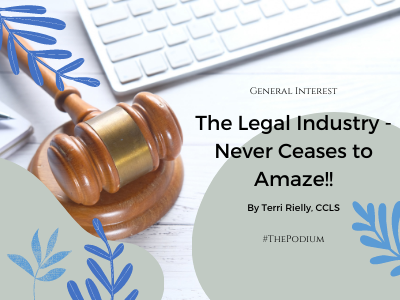 I have worked in San Diego’s legal industry, on and off, since July 1984–  before Fast Track or metal detectors.  Having always been intrigued by the law, each time I stepped away for this reason or that, I always knew I would return. The one time I did consider another path, I signed with a temp agency thinking it might be nice to just experience a different role.  My first assignment was a ten-month gig with a company who ran the shipping/receiving and filing for the records center, at Procopio! I knew then, I was meant to be here, in the thick of it.

However, this time around, I felt I needed more for myself and I decided to turn up the heat with my career.  I registered for the CCLS exam and began the litigation boot camp with a very special group of secretarial-soldiers, ready for legal battle.

And, just like all things law, COVID hit, and forever changed what we believed to be certain and brought unchartered areas that only soldiers could endure. We pioneered the first CCLS remote-exam together, then waited for the results not knowing if they would come via snail or e-mail.  When they finally came, I felt a huge relief, grief and little disbelief.

But, with the pink-platoon support group,  we viewed the experience as “failing-forward” and that was it… and it was onto the LPI/LSA November Conference. Excited, is an understatement. As work will sometimes have it, Friday was extremely stressful and tiring!  I checked into the hotel and intended on meeting with the others, however, once I reached my room, that was all she wrote…I woke in the early morning hours with my keys still in hand!  So I made sure to hit the Governor’s Meeting early.  When they asked for the hands of the “first time Conference attendees” I raised mine.  I was apprehensive when they directed me to the microphone to introduce myself! But I walked up to the microphone, tapped it twice to see it was on, and introduced myself – to have the entire room yell out “CCLS”!!  Now I had to straighten out any misunderstandings, I did not pass all seven sections (I thought) but to my sheer shock and disbelief…they were informing me that I had, in fact, passed that mini bar exam!! OMG…I could not believe it at the same time thinking “shoot my tears are going to streak my makeup!!  But it was gloriously true… there were streaks down the face of the newest CCLS Elite!