The First Day of Winter is Almost Here 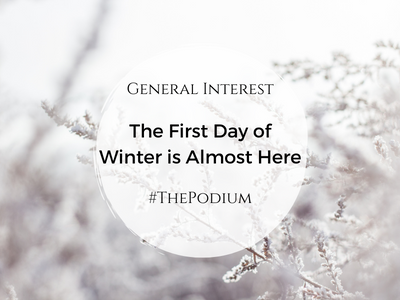 The First Day of Winter is December 21 also known as Winter Solstice. This day marks the astronomical first day of winter in the Northern Hemisphere and the shortest day of the year. This exact moment will happen at 4:48 pm EST. After this day, the days will begin to once again grow longer and longer until we reach the summer solstice.

As we are experiencing the start of winter the Southern Hemisphere will start enjoying the start of summer. On the day of the winter solstice, we are tilted as far away from the Sun as possible. If you are outside at noon, on the day of the solstice, look at your shadow. It’s the longest shadow that you’ll cast all year. This shift in season is thanks to the Earth’s tilted axis, so one-half of Earth is pointed away from the Sun while the other half is pointed towards the Sun.

The word solstice comes from the Latin sol “sun” and sistere “to stand still” meaning “sun stands still.” For a few days before and after the solstice, the Sun’s path across the sky appears to freeze.

Out of the darkness emerges the light.

Today marks a new and wondrous cycle of Life!