Famous People You Never Thought Would File for Bankruptcy Protection 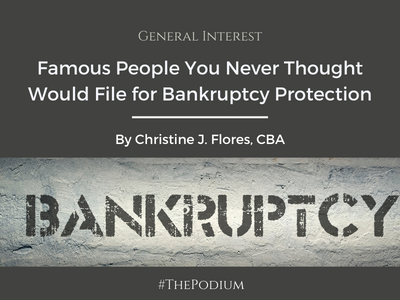 We’ve all read in the news about famous people who filed a bankruptcy case.  You’ve probably wondered how that can be?  The most recent case that comes to my mind is that of NHL hockey player Evander Kane.  He had a massive amount of gambling debt, and his bankruptcy petition estimated his liabilities to be between $10 million and $50 million.  He estimated his assets to be in the same amount.  Mr. Kane is not the only wealthy individual to file a bankruptcy petition.  Unfortunately, the cases outlined below were filed before e-filing, but here is a summary of the cases of a few people you never would have guessed filed a bankruptcy petition.

Abraham Lincoln – Before President Lincoln took office in 1861, he was a business owner and investor.  Sometime around 1833, when Lincoln was in his early 20s, he owned and managed a small general store in Illinois.  When the business was not going so well, he sold 50 percent of the ownership interest in it.  The investor who bought half of the business passed away soon after, leaving the future president with 100% of the liabilities.  In the late 1800s bankruptcy laws were not as developed or debtor-friendly as they are today, and offered no safety net.  Abraham Lincoln had his home and other assets taken.  He did manage to repay his creditors in the end.

Walt Disney – Before becoming a success in the area of animated movies and theme parks, Walt Disney had a rough path to that success. He was an animator in Kansas, running a small animation studio with two other animators.  Unfortunately, that business, Laugh-O-Gram went out of business.  Apparently part of the reason for the failure was that he was cheated by one of his distributors.  Walt Disney was forced to declare bankruptcy by 1923.  He thereafter borrowed money from his family and friends, and went on to produce Snow White -the first full-length animated film ever made.  As they say, the rest is history.  Walt Disney proved that it takes more than wishing upon a star to come out of bankruptcy successfully.  Careful management of his financial assets and knowing where to get financing is the key.

Ulysses S. Grant – Our nation’s 18th president declared bankruptcy after a partner in an investment banking firm swindled him, causing a loss of $150,000.  Grant liquidated his assets and managed to repay the debt.  He later signed a book deal that netted his family over $400,000.

William McKinley – While serving as Ohio’s governor in 1883, our nation’s 25th president found himself to be $130,000 in debt after a friend defaulted on loans that McKinley endorsed.  His friends raised the money to pay this debt, and he went on to be elected as President just three years later.

Today’s federal bankruptcy laws allow for the discharge of honest debt to provide a fresh financial start to individuals and companies.