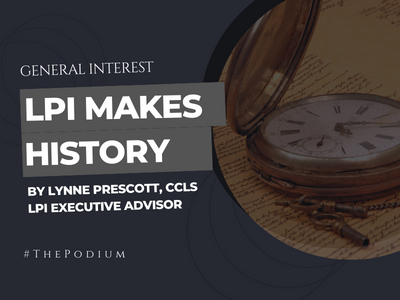 It is ironic to think that when this organization was first incorporated in 1940, the legal field and legal offices were predominantly populated by men, and having a female serve as the statewide president of a legal industry corporation was practically unheard of. Fast forward to 2022 and the legal field is broadly represented by women, especially those in legal support positions, with men primarily in attorney, law clerk, or paralegal roles. The “unheard of” in 1940 has become the accepted norm over the years, and 47 women have held the esteemed position of president of this corporation.

On May 22, 2022, at LPI’s 88th Annual Conference of Delegates and Board of Governors Meeting in Santa Clara, California, Rod Cardinale, Jr., was installed as LPI’s 48th president, the first male to serve in that role in the corporation’s 88-year history. Rod has been an integral part of broadening and sharpening the image of LPI, including paving the way for men in LPI to serve a bigger part in our organization.

When asked why he continues to be a member of LPI and why serving in a leadership role is important to him, Rod states, “I believe in LPI and its mission. I want to do everything I can to help make sure that this corporation is around for the next generation. I think we’re taking the correct steps to get us back on the right track, and I’m proud to be a part of it.”

After nearly a year-and-a-half of planning and collecting, Legacy Project Chair/Curator Heather Edwards, CCLS, and team, created a living pop-up museum at LPI’s 88th Annual Conference in Santa Clara.  The ribbon-cutting for the museum was held on Friday morning, complete with celebratory refreshments and lots of excitement in anticipation of this long-awaited reveal.  Members were able to see, touch, and experience LSI/LPI’s rich history through various exhibits and stations throughout the museum, which included vintage legal industry and office equipment, vintage manuals and books, magazines and bulletins going back 50 years or more, treasured history books from associations throughout California, government proclamations and awards, jewelry, apparel, and photos.

Some of the more popular vintage exhibits included a 1950s stenographer’s machine, complete with the original wooden case and roll of steno tape, manual and electric typewriters, a vintage word processor, vintage intercom machine, transcribing headset, and several old telephones.  The typewriters were even dusted off for a “type-off” contest.

Each station was accompanied by a timeline of events and information, and timeline brochures were also provided to guests. A video monitor was among the exhibits with a slideshow that took viewers through the years of LSI/LPI and legal industry progression.

The museum was a feast for the senses, with something to see, smell, and touch at every turn. It was truly a walk through our history never seen on this scale before. The care and thought behind the project was evident in every detail.

A video of the ribbon-cutting and walk-through of the museum was recorded by Erika Garduño and can be viewed on LPI’s Facebook page.

For the first time in its history, LPI presented a lifetime achievement award – – The Legacy Award – – in recognition of the lifetime achievements of an LPI member who has made a lasting, indelible imprint upon the organization and the legal profession, and exemplifies the principles of paying it forward and giving back.  The award was presented to Mary S. Rocca, CCLS, LSI Past President 2004-2006, of Alameda County LSA.