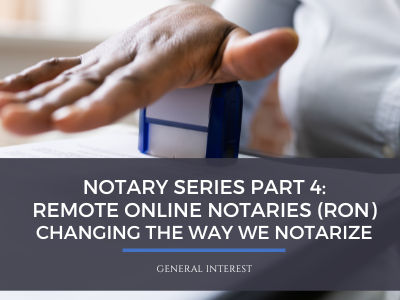 There is a new kind of notary (hopefully) coming to California!  On January 27, 2022, the California Assembly Judiciary Committee voted to pass a new bill to allow Remote Online Notaries (RONs) in California.  The bill which passed (56 to 4) is called AB 1093.  This bill would allow existing and new notary publics to conduct notaries via their computers.

According to the bill (if it passes the California Senate as written), some of the merits include:

AB 1093 has some definite perks and a few disadvantages.  Let’s discuss this further.

This all sounds good so far, right?  Now onto the disadvantages.

The first disadvantage of this bill is that the notary public would need to take an additional class(es) to become a Remote Online Notary with the possibility of another certification exam.  However, notary organizations are lobbying for this information to be taught in the existing classes that are being offered and included as part of the state’s initial and re-examination testing.

The second disappointing part about RON is that the online platform can cost upwards of $450 to $500 per year.  Although California has not discussed a fee increase for online notarizations, the going rate for other states that permit these acts is $25 per signature per document.  In California, an in-person notary fee is $15 per signature per document, as regulated.

The third disadvantage of this program (but possibly the most obvious) is that both the notary public and the public must have a way to access these online platforms.  That means that if either you or the signer does not have a computer it is a no-go for this type of act.  The bill also does not discuss the possibility of incompatibility of either Macs or PCs with these platforms.

For now, though it is a wait-and-see process.  I know for many notary publics, myself included, this is a humongous opportunity.  If this bill were to fully pass in California, it would be one giant step toward notary inclusiveness for our state and the country as a whole.