In the Headlines: Serving Celebrities – Are the Actions of a Process Server Appropriate when Serving Someone in Public? 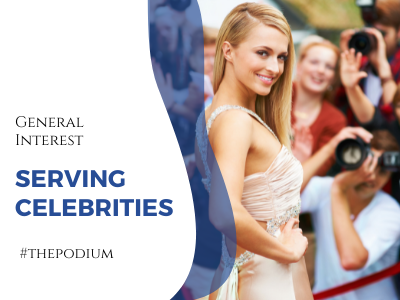 Recently in the news, we saw that Actress/Director Olivia Wilde was served legal documents while onstage at the CinemaCon convention in Las Vegas, promoting her new movie, Don’t Worry Darling. A woman appeared from the audience, walked up to the stage, and slid a manila envelope toward Ms. Wilde.  The envelope had the words ‘Personal and Confidential.’  According to reports, those in the audience stated that Ms. Wilde, bent down to pick up the envelope and said, “What’s this, a script?”

Although realizing that the contents of the envelope were legal documents, which were drafted to establish jurisdiction relating to the children she has with actor and ex-fiancé Jason Sudeikis.  The actress apparently did not react and kept on presenting her movie to the audience of 4,000 industry people.  It was later that we heard she was mortified from the experience.

Once the news broke, representatives of Mr. Sudeikis said that he had no idea of the time and place which the documents were delivered.  The decision was on the process serving company.  This led to many stating that the actions of the female process server were inappropriate.  But were they?  Although Mr. Sudeikis stated he had no knowledge of the time and place that the delivery was going to take place, but how much did he really know?

Those of us in the legal industry typically know that we get direction from the clients, especially in a contentious case where the other side may evade or make it difficult to make themselves available to accept service.  But this situation has surfaced the question, what is appropriate when serving celebrities or those that are wealthy?

Each state has its own rules as to how documents can be served but there isn’t any language that prohibits serving people in public.  There are certain steps that process serving companies take to make sure we have the information needed to ‘effectuate service.’  Often a place of business or residence is the first choice, but what happens when you cannot reach them at their residence or their place of business?

Although we don’t have all the facts in this situation, some process serving experts have been interviewed to help the public better understand how the guidelines work when serving legal documents.  Did this process server do anything wrong?

While industry experts say no, the question of ethics given the type of documents and the venue in which Ms. Wilde was served has brought this issue to light. There are beliefs and ideals that it is important for process servers to get creative when serving documents, especially in difficult cases where the party is evading service.

It’s best to seek the advice of a Process Serving Agency as they can help you formulate a plan based on your situation within your case.  The important thing is that all laws are followed when it comes to the manner in which the party is served based on the nature of the documents you are serving.  Serving in a public venue is typically appropriate.  But when it comes to high profile people, especially those that may have bodyguards, the likelihood of getting close to someone in those circumstances maybe not be the best option.  Process servers have to exercise their judgment when it comes to specific situations.  But in most cases, the attorney and their client do have some input on the process as they provide important information to get the job done.

We thought this situation had surfaced an interesting take on how process servers handle serving high-profile individuals.  While attorneys typically provide key information that is helpful to process serving companies, there are certain things that a process server cannot do when serving people.  We thought it would be appropriate to share a couple of articles that were written on this topic.

But if you seek more information about Process Serving, please review our series on the ‘Ultimate Guide to Process Serving.’  In the meantime, we have provided links to two publications that cover this situation.

A top process server defends the woman who served papers to Olivia Wilde and says she ‘got the job done’ by Jane Ridley of Insider:

Inside the world of process serving:  Explaining what happened to Olivia Wilde by Vanessa Romo, KUOW/NPR: