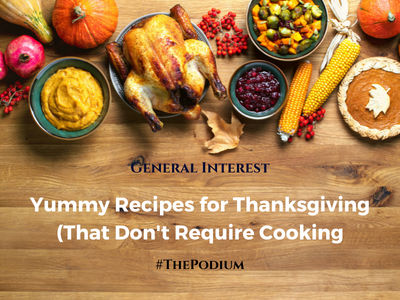 These recipes require NO cooking but DO require some grocery shopping for pre-made ingredients.

In a large, clear bowl, layer the following in order:

Repeat the layers a second time.

The third and final layer should be cornbread, bacon, and green onions. You can add extra shredded cheese if you like to the top layer. Refrigerate for 2-3 hours before serving.

Serving suggestions: Use pico de gallo or your favorite salsa instead of the tomatoes. Diced avocado is really yummy in this salad, as is diced jicama or apple!

Substitution – – If you don’t have any pumpkin lovers in your group, substitute apple pie for the pumpkin pie.

1 can of whole berry cranberry sauce

Spread a thin layer of the herb and garlic cream cheese spread all over a tortilla.  On top of the cream cheese, add a layer of the thinly-sliced turkey.  Then spread a thin layer of the cranberry sauce over the turkey slices.  Starting at one end, roll the tortilla into a log and wrap tightly with plastic wrap.  Repeat until you have the desired number of logs (for a gathering of 10 people, prepare one log per person).  Refrigerate the wrapped logs until just before serving.

When ready to serve, remove the plastic wrap and slice the logs into rounds (about an inch or so in size) and arrange on a serving tray.