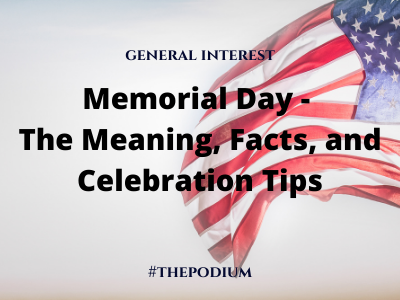 Memorial Day is a much-celebrated holiday in the U.S. as it typically signifies the beginning of summer.  As most of us view it as a patriotic three-day holiday to get together in our backyards and host barbeques with family and friends by sporting our flag of the good ole U.S.A. But if you take the time to ask people about the significance of the holiday, their responses may surprise you.

Let’s explore the origins of this day and provide some helpful information about how to appropriately celebrate this beloved holiday.

Back in the mid-1800s, people wanted to honor the fallen soldiers of the American Civil War.  Many died in the fight between the North and the South.  In 1864, a group of women in Pennsylvania began visiting the graves of the soldiers who gave their all and placed flowers on them in memory of their service.  In 1866, after word spread about visiting and decorating the graves, women in Mississippi began doing the same.  This is how the day first became known as ‘Decoration Day.’

Waterloo, NY was the first place that officially celebrated the holiday and it spread from there.  On May 5, 1868, General John Logan made the day official.  Flowers were placed on the graves of both Union and Confederate soldiers at the Arlington National Cemetery.

After World War II, Memorial Day became a more common name than Decoration Day but was not declared the official name by federal law until 1967.  On June 28, 1968, Congress passed the Uniform Monday Holiday Act, which moved four holidays, including Memorial Day, from their traditional dates to a specified Monday, to create a convenient three-day weekend. This moved Memorial Day from May 30th date to the last Monday in May.  The law took effect at the federal level in 1971.

How to Properly Observe Memorial Day

In addition to celebrating this day with family and friends to memorialize those that fought for us, here are some ways to properly observe this holiday:

No matter what you do this Memorial Day, take some time to remember the true meaning of the holiday to honor those who have served our country and fought for our freedoms.