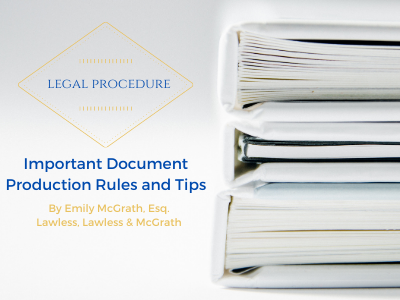 As of January 2020, the California Code of Civil Procedure now requires that “[a]ny documents or category of documents produced in response to a demand for inspection, copying, testing, or sampling shall be identified with the specific request number to which the documents respond.” (Cal. Civ. Pro. § 2031.280(a).) Where responding parties were once allowed to dump thousands of documents on the requesting party in the order in which they were kept “in the usual course of business,” now responding parties must specifically sort and organize their document production in response to the Requests for Production they received in litigation. In practice, many responding parties have addressed the new Code requirement by providing Bates stamp numbers of the responsive documents in the written response to the Request for Production. For example, if Plaintiff’s Request for Production No. 10 is “The complete contents of Plaintiff’s personnel file,” the Defendant may respond “Defendant will produce all responsive documents in its possession, custody, or control, which can be found at Bates stamp 0001 – 0065.” Importantly, the Code now requires all responsive documents to be produced contemporaneously with the written objections/responses. (Id. at § 2031.280(b).)

Somewhat confusingly, however, the new Code section still uses wording similar to the old “in the usual course of business” phrase. In addressing Electronically Stored Information – also called “ESI” – the Code states that “[i]f a demand for production does not specify a form or forms for producing a type of electronically stored information, the responding party shall produce the information in the form or forms in which it is ordinarily maintained or in a form that is reasonably usable. (Id. at § 2031.280(d)(1) [emphasis added].) What this means is that specifically with respect to ESI, the producing party can hand it over to the requesting part in the form in which it is “ordinarily maintained.” So for example, if a business usually keeps client lists in Excel sheets, that business can produce that client list that is responsive to Request For Production No. 2 in Excel format; it does not have to convert it to a PDF or a Word doc. To be certain, though, the new requirement of identifying to which Request the ESI is responsive still applies.

The form in which ESI is produced is important and deserves special attention. California and Federal courts have special rules which allow the requesting party to specify the form in which ESI is produced. (See, e.g., Cal. Civ. Pro. § 2031.010 et seq., Fed. R. Civ. Proc. 34(B).) From a practical standpoint, the requesting party often requests that documents be produced in a de-duplicated, word-searchable format with the metadata intact. De-duplication helps the requesting party avoid such dreaded tasks as, for example, sorting through multiple e-mails strings in varying stages of completion. A “word-searchable” format allows the responding party to expedite document review with electronic keyword searches, and obviates the need to perform the time-consuming and sometimes unreliable Optical Character Recognition (“OCR”) process in Adobe. Additionally, document metadata can be a goldmine of information. In Microsoft Word, for example, metadata includes: the date the document was created, the names of the author and most recent modifier, and the dates of any document changes plus the total edit time. This can sometimes be very useful information.