Conservatorships: Who is on Britney’s side? 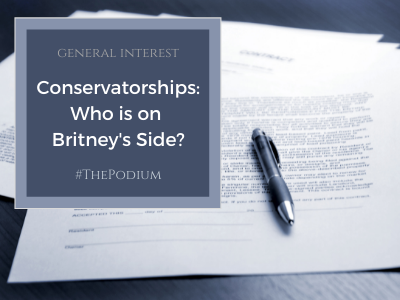 This is such a public and compelling story unfolding at this time. For more precise, detailed information, please refer to the articles cited within this post.

First, let’s get an abbreviated summary of the basics of a conservatorship.

Under the probate division there are two types of Conservatorships:

There is another category, Lanterman-Petris-Short (LPS) Conservatorships. This type of conservatorship is for adults with serious mental health illnesses who need special care and usually need restrictive living arrangements and require extensive mental health treatment.

[The above information was gathered from: https://www.courts.ca.gov/selfhelp-conservatorship.htm]

A timeline of Britney’s journey will provide some interesting information.

Britney has been under conservatorship since 2008, with her father, Jamie Spears, acting as conservator.

As of the writing of this blog post, Britney’s attorney, is aggressively working on preparing and filing a petition to terminate the conservatorship, or at a minimum to permanently remove Jaime Spears as conservator. This is a fluid conservatorship as there are many twists and turns along the way so don’t rely on this as being up to date. If this comes to fruition, then those on Britney’s side include her current attorney, the judge, the conservator (not her father but Jodi Montgomery or another independent conservator), and the court investigator.