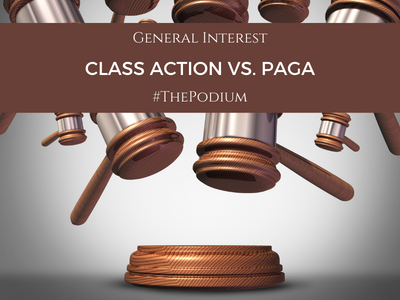 WHAT ARE CLASS ACTION CASES?

A class action lawsuit is a single lawsuit which enables one or more plaintiffs to file a lawsuit on behalf of a larger group of people (the group is called the “class”) in a civil court. The lawsuit may be filed in either state or federal court, depending on the type of case that it is.  A class action lawsuit is appropriate where numerous employees have similar claims against their employer, and avoids the difficulty of joining all individual employees in a single suit, as well as the potential for inconsistent verdicts in separate suits. Class action helps the court to more easily manage lawsuits that could have many class members.  Usually, only one person needs to file a class action lawsuit, and that person can seek to represent all of the other employees that are “similarly situated.” That person can be a current employee or a former employee, and is called the “class representative” and must act in the best interests of other similarly situated employees.  Not every class member needs to join the lawsuit by name as a plaintiff but can still benefit from the outcome.

Many illegal employment practices and policies impact many employees yet few, if any, employees challenge these practices. Class actions are a mechanism through which one or more people can file a lawsuit for relief of illegal practices on behalf of others. A class action is a lawsuit brought by a group of people who have suffered a similar loss or injury by the same responsible party. A class action is initiated by one more plaintiffs, called “class representatives,” who have suffered a similar loss or injury than the others, and have similar interests. The class representative actively participates in the lawsuit on behalf of the other injured people, and looks out for their interests. For example, where a company fails to pay overtime to all of its non-exempt employees, one more of those employees could file a single lawsuit on behalf of all of the employees who were denied overtime.

WHAT ARE “PAGA” CASES – PRIVATE ATTORNEY’S GENERAL ACT OF 2004

California has a unique enforcement mechanism for alleged labor code violations—the Private Attorneys General Act of 2004 (PAGA), which allows employees a private right of action to collect penalties against their current or former employers.  Where the Labor Code does not specifically provide for a civil penalty, PAGA creates one. These penalties, which can be collected for each employee for each pay period in which the employee worked within the statutory period, can add up very quickly. PAGA also provides for an award of the employee attorneys’ fees and costs incurred in litigation. This incentivizes plaintiffs’ attorneys to bring such claims. PAGA authorizes and enables aggrieved/wronged employees to file lawsuits against their employers to recover civil penalties on behalf of themselves, other employees, and the State of California for Labor Code violations.  California’s wage and hour laws provide a broader range of rights for employees than federal law or the laws of other states. In addition, California’s Labor Code generally allows a successful employee to recover attorneys’ fees, whereas a successful employer is not able to recover fees from the employee.

PAGA has dramatically increased exposure to the number of litigation claims for employers in the state. Effective in 2004, PAGA shifted responsibility for labor code enforcement to private citizens due to limited state government resources. Over the years, a series of court rulings lessened barriers for employees to bring claims. These rulings determined that certification requirements don’t apply to PAGA actions, the right to arbitration can’t be waived by employees to bring a PAGA claim, and that plaintiffs are entitled to significant amounts of information when bringing a claim.

In recent years, there has been a proliferation of employers forcing their employees and new-hires to sign lengthy arbitration agreements in which they waive their right to bring a class action lawsuit, or to even be part of a class action lawsuit. These agreements are often buried in a stack of onboarding documents, written in single-spaced small font, and full of difficult language. Despite repeated attempts by the California Supreme Court to invalidate arbitration agreements which contain “class action waivers,” the United States Supreme Court has authorized the use of these waivers. California passed the Private Attorneys General Act of 2004, which is a unique law allowing California employees to file a representative lawsuit on behalf of other employees who have suffered the same harm under the California Labor Code. In PAGA lawsuits, the employees act as “private attorney generals” acting on behalf of the California Labor Commissioner. Because of this, PAGA claims cannot be forced into arbitration since the California Labor Commissioner never agreed to arbitrate any claims. PAGA claims are also not subject to the same requirements as class actions. PAGA suits can be filed even if the employee has signed an arbitration agreement as part of their employment. One final significant difference: PAGA has a one-year statute of limitations. This means that the plaintiff must file their notice of an alleged Labor Code violation with the California Labor and Workforce Development Agency (LWDA) within one year or sooner of when it occurred. Employment class action claims typically have a three-year statute of limitations.