Managing Risks – Staying on Top of Conflict of Interest Checks 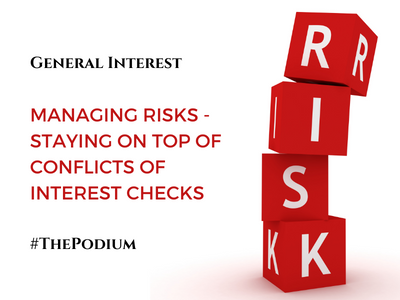 Until the California Supreme Court adopted the new California Rules of Professional Conduct (CRPC) in 2018, (Rules 1.7, 1.9, 1.10, 1.11, and 1.18), California did not have formalized conflict of interest rules advising a California attorney or law firm on how to navigate a particular conflict of interest issue. Conflicts of interest refer to ethical problems that may arise between parties with a preexisting relationship. For example, an attorney and a client; an attorney is representing a new client in an employment dispute with their employer, but that attorney also represents that employer.  Conflicts of interest and non-disclosure of conflicts are leading reasons for disqualification of representation.  Imagine on the eve of trial you are served with a motion to disqualify your attorney from the case based on a conflict of interest, or for not securing informed consent for the conflict.  Most conflicts can be waived with the affected party’s informed consent. Under the new California Rules of Professional Conduct, no conflict can be waived without the affected party’s informed consent. In most instances, that informed consent must be confirmed in writing. The conflict waiver is a written document signed by each party that specifically discloses the risks, benefits, and alternatives of the dual representation. A properly executed conflict waiver allows the attorney to steer clear of claims by a party of unethical conduct or malpractice related to the dual representation.

You can help to prevent an avoidable conflict of interest by making sure that conflicts have been run throughout the pendency of your case, and the appropriate disclosure(s) and informed consent(s) have been received when required.  Conflict checks should be run on all parties to an action prior to engagement, and then on all additional persons or entities affiliated in any way to existing, new, and potential matters.  Conflicts must be checked before offering advice – even “urgent” advice.  You are likely to be contacted by an existing or potential client with a time-sensitive situation, and the need for urgent advice.  This is not only a red flag, but such advice should not be entertained until conflicts have been run and are either determined not to exist, or cleared or waived by informed consent.  Ethics rules apply in the remote work environment just as they do in the traditional office settings, and before any advice is given, conflicts should be run.

The best practice for new matters is a thorough conflict check which should be done at the onset of all potential new matters.  The best way to accomplish this is to review all preliminary correspondence and documents that have been provided.  Identify all persons and entities associated with the new matter, and add them to your conflict check before an attorney starts work on a matter, and prior to engagement.  Go through every bit of correspondence available, including attachments to complaints, such as contracts or any written agreements, and include every name you come across.  For businesses, do a Secretary of State Business entity search, and include the names of the officers of the business entity. It may seem like overkill – but there’s nothing worse than representing a client for a period of time and finding out you have a conflict, especially an avoidable one.

The best practice for existing matters is to remember that conflict checks do not end once a matter is open and active.  Any time a new person or entity is brought into a matter, conflicts must be run and any “hits” evaluated by an attorney.