Chipping Away at Employment Arbitration Agreements 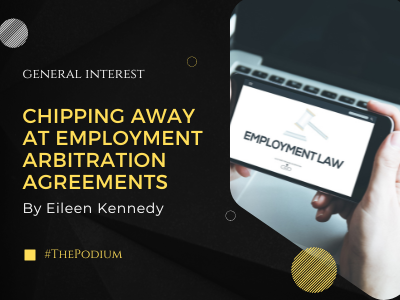 In early March 2022, President Biden signed into law the “Ending of Forced Arbitration of Sexual Assault and Sexual Harassment Act of 2021” (“Act”).  This Act makes pre-dispute (entered into before a dispute arises) agreements to arbitrate sexual harassment and sexual assault claims invalid and unenforceable.  This Act also renders invalid and unenforceable a pre-dispute agreement that prohibits or waives the right of one of the parties to the agreement to participate in a joint, class, or collective action concerning sexual harassment or sexual assault disputes.  This Act amends the Federal Arbitration Act (“FAA”), applies to most employers across the United States, and now signed into law, has immediate effect.

This Act may have an impact on pre-dispute arbitration agreements used by California employers. Over the past several years, California employers have often asked employees, as a condition of employment, to sign an arbitration agreement wherein both the employer and the employee promise to bring any employment-related dispute that may arise in the future before an arbitrator, rather than a court.  These agreements typically required the employer to pay the arbitrator fees and the costs of the arbitration and required both parties to waive their respective rights to a jury trial of most employment disputes that may arise in the future.

The practice of requiring employees to sign pre-dispute arbitration agreements as a condition of employment was made unlawful by the California legislature as of January 1, 2020.  The California law prohibiting such a practice was immediately challenged, and a United States District Court issued a temporary and later permanent injunction, prohibiting California from enforcing this law on the grounds that it was pre-empted by and interfered with the FAA.  As of September 15, 2021, the Ninth Circuit Court of Appeals lifted the injunction, allowing California to enforce this law, and reversed the District Court’s ruling.  More challenges to this California law are expected, but as of today, California law prohibits forcing an employee to sign a pre-dispute arbitration agreement as a condition of employment.

About the Author: Ms. Kennedy is a partner with Berliner Cohen’s labor and employment group. She can be reached by phone at 408.286.5800 and via email at eileen.kennedy@berliner.com.