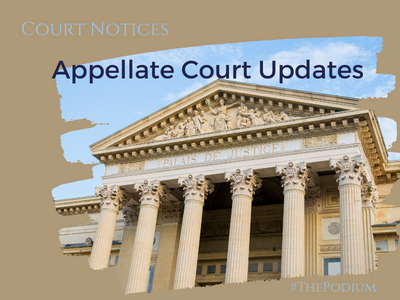 On November 30, 2022, the Commission on Judicial Appointments unanimously confirmed the nominations of Gregory J. Weingart as Associate Justice to Division One and Victor Viramontes as Associate Justice to Division Eight of the Second District Court of Appeal. Read more on the California Courts Newsroom: Commission Confirms Appellate Court Appointments | California Courts Newsroom

December 5, 2022: Open to the Public by Appointment Only

The Clerk’s Office in Los Angeles and Ventura is open to the public by appointment only. Self-represented litigants can submit paper filings, including emergency writs, by placing them in a drop box located on the second floor at the entrance to the Clerk’s Office.

The Court of Appeal, Fourth Appellate District, Division One (San Diego) has announced its intention to destroy some of its criminal, juvenile, and civil records under Rule 10.1028(c) of the California Rules of Court. News release

November 29, 2022:  Clerk’s Office Window to Close for a Short Period of Time

The drop box on the 10th floor, next to the Clerk’s Office at 333 West Santa Clara Street, San Jose, CA, will be available to the public for dropping off documents

The Commission on Judicial Appointments confirms the appointment of Mr. Daniel Bromberg to the Court of Appeal, Sixth Appellate District. View more details about the confirmation hearing.